On the surface, it’s easy to see why any company with a heavy digital presence would focus on digital channels primarily. Tactics such as email marketing, search engine optimization and social media advertising offer hard KPIs, allowing marketers to both only pay for desired results and to quantify precisely the impact of their efforts.

Let’s say a small business with limited budget wanted to promote its product or service. It could run online ads like Google display ads, and quickly see a return on investment even if the initial spend amount was small. Compare that with print advertising. With print ads, you hope someone sees it and takes action, but you may not ever know the ROI of that initial spend. It is for this reason that many online-centric businesses have prioritized digital channels.

But is this kind of either/or positioning the best way to structure your marketing campaigns? Maybe not. After all, people still see billboards, watch linear television and read newspapers and magazines. For many performance app marketers, it can often be advantageous to combine online advertising and offline advertising in an intelligent manner to drive new business.

The Premise: Should Offline Advertising Be Included in the Marketing Budget?

A great beginning use case for combining the two strategies is with a campaign that combines billboards with targeted in-app mobile ads. In certain key geographies, the odds are good that the core personas being targeted are likely being exposed to both the billboards and to the mobile ads.

How would such a combination campaign be measured? Given that we know the exact location of the advertiser's billboards and users at that location, we can measure immediate reactions. Combining location data from both mobile and billboards, along with other identifying factors coming from mobile ads and telco data, can give marketers a good idea of how the two tactics are working in tandem with one another to drive forward the goals of the campaign.

This same premise can work with other offline ad channels that run on a set schedule, such as radio, television or even certain digital out-of-home ads. When the exact time-slots when the ads are aired is known, marketers can use timestamps to determine if target audiences were taking desired actions in the immediate aftermath of an offline ad being run.

The Proposal: Measuring the Effectiveness of Offline Advertising for Specific Audiences

At the outset of the campaign, develop parameters for how the offline media will be measured. With billboards, location is a crucial component. Geofencing, in which a pre-set radius is drawn around a core central point, has long been the default mechanism within billboard advertising.

In many instances, however, polygons may be preferable. With polygon measurement, a precise boundary is drawn around the central point, and only those within the boundaries get counted. This makes polygons more precise than geofencing, and helps prevent accidental spillover. For example, to measure the effectiveness of a billboard within a contained environment like an airport or a mall, a polygon would help ensure that people just passing by outside are not accidentally counted.

With offline media that runs on a set schedule, like a TV ad scheduled to run during a live sporting event, the key metric is time instead of location. The goal here would be to see if target audiences take the desired action within a set amount of time after being exposed to both ads. For example, it may be advantageous to show someone a mobile ad 15 minutes after a radio ad was just aired.

Before moving forward with any combination marketing campaign, try to set intelligent hypotheses. Use whatever data is available to make educated guesses on how many of the right people will be exposed to both/all types of media being run, and what the user flow may look like. This effort ensures that you’re always going after a specific target and not just flying blind.

Overcoming the Challenges of Non-Digital Marketing

Taking this effort to effectively combine two or more types of media, including online and offline advertising, can seem daunting. After all, offline media like billboards and newspaper ads have historically been black boxes compared to the amount of data digital ad channels make available to advertisers.

But, remember that just about everything is now measurable. Given the right tools, techniques and datasets, even something like an ad on the side of a bus can yield a treasure trove of intelligence and information.

What Gets Measured in Non-Digital Advertising?

During the campaign, keep a careful eye on any changes/deviations to the norm in terms of app installs, app usage, visits to your websites, etc. If volume on any of these metrics is significantly higher at or near the location of a billboard or around the time a radio or TV ad ran, then that boost can safely be attributed in part to the offline media.

Here’s an example how an offline and online marketing campaign can be measured: 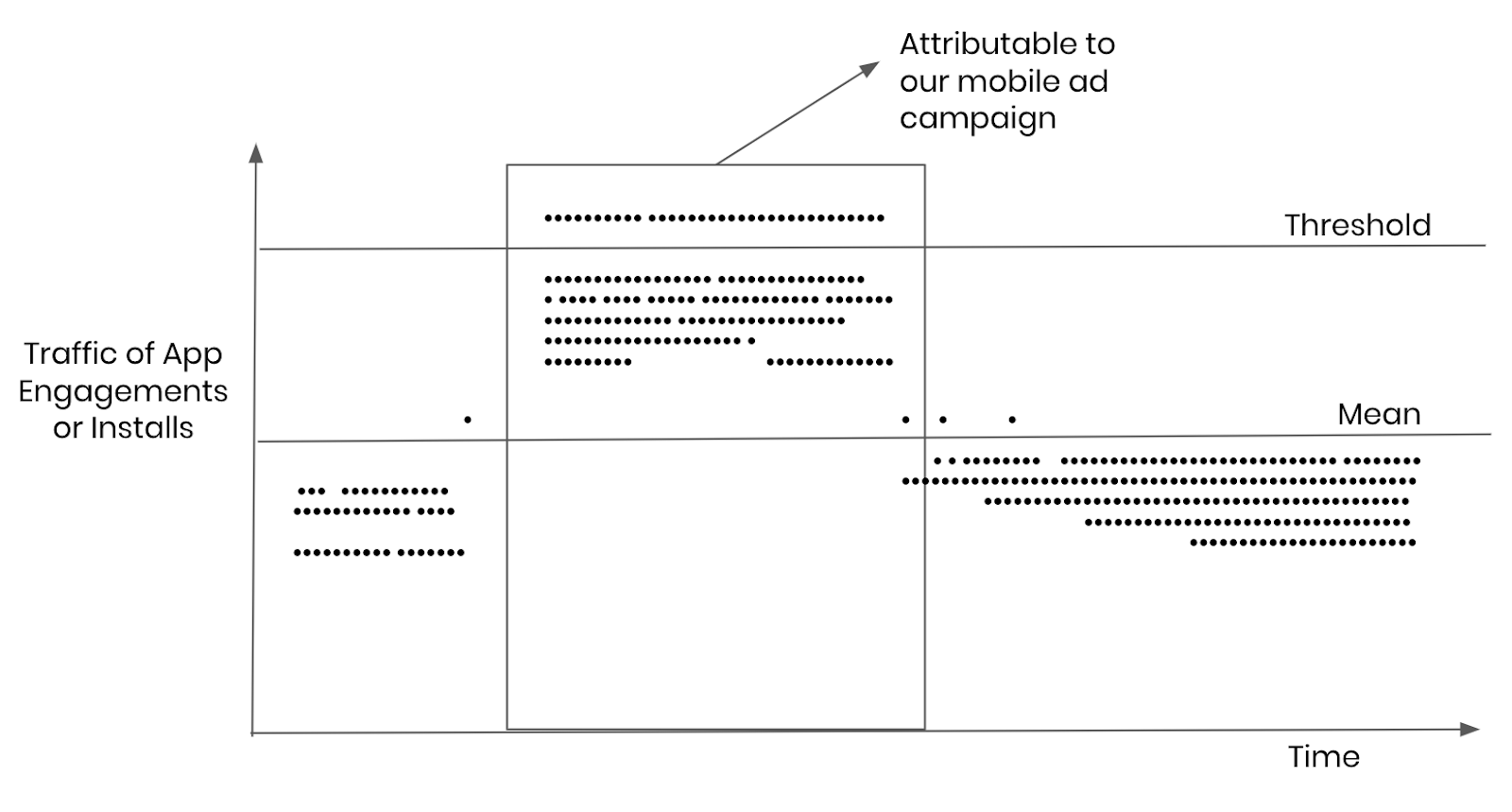 However, precautions need to be taken to filter out sources of traffic, usage, installs, etc. that can be due to fluctuations from other marketing campaigns. It’s critical to be as precise and exacting as possible in measurement, in order to make sure you are drawing the right conclusions.

To do this, a dynamic threshold needs to be applied to differentiate signal from noise and attribute the jump to the mobile ad campaign. This requires both knowledge of app history and that app's user behavior.

Through such an effort, offline advertising and online advertising can be effectively joined together. As capturing attention becomes harder and as the media landscape becomes more fragmented, such a combined approach is often ideal for discerning marketers — especially those with lower-funnel performance goals.

Interested in learning more on this topic? Check out these resources:

Matthew Kaplan has over a decade of digital marketing experience, supporting the content goals of the world’s biggest B2B and B2C brands. He is a passionate app user and evangelist, working to support diverse marketing campaigns across devices.