Americans are Turning to Apps for Entertainment During COVID-19 With most of us across the United States sheltering in place throughout March, April and May, we’re turning to mobile apps for entertainment. While stuck at home, many are turning to their mobile devices (iPhone, iPad, Android devices, etc.) to watch movie and TV show content, play mobile games and otherwise keep themselves entertained.

But to what extent has the use of these kinds of mobile applications really changed of late? Which apps are Americans turning to, and who are specifically turning to streaming services and gaming apps to keep themselves entertained? That’s what we wanted to find out.

For a better understanding of consumer behavior with mobile gaming and for streaming services, we ran two mobile surveys, one in March and one in April. And for app install trends for iOS and Android (Google Play Store and Apple’s App Store), we reviewed insights from our first-party telco data.

As expected, our surveys in both March and April found that people are more inclined now to watch TV shows, play music, stream movies, play games on their phone and overall increase their entertainment app usage habits. In fact, between March and April, the share of survey respondents who said they were now spending more money on entertainment went up by three percentage points.

In April, close to a quarter of Americans polled said they were watching more TV series and other similar content through cable or satellite, while a third said they were streaming more TV. Overall, 78% of survey respondents said they had changed their media consumption habits in some capacity since the pandemic began.

Apps and mobile devices (like the iPhone and Android-powered devices) are increasingly critical to feeding media consumption habits now. The April survey found that 21% were using music apps more frequently, while 25% were using entertainment apps more and 40% said they were playing mobile games more frequently. 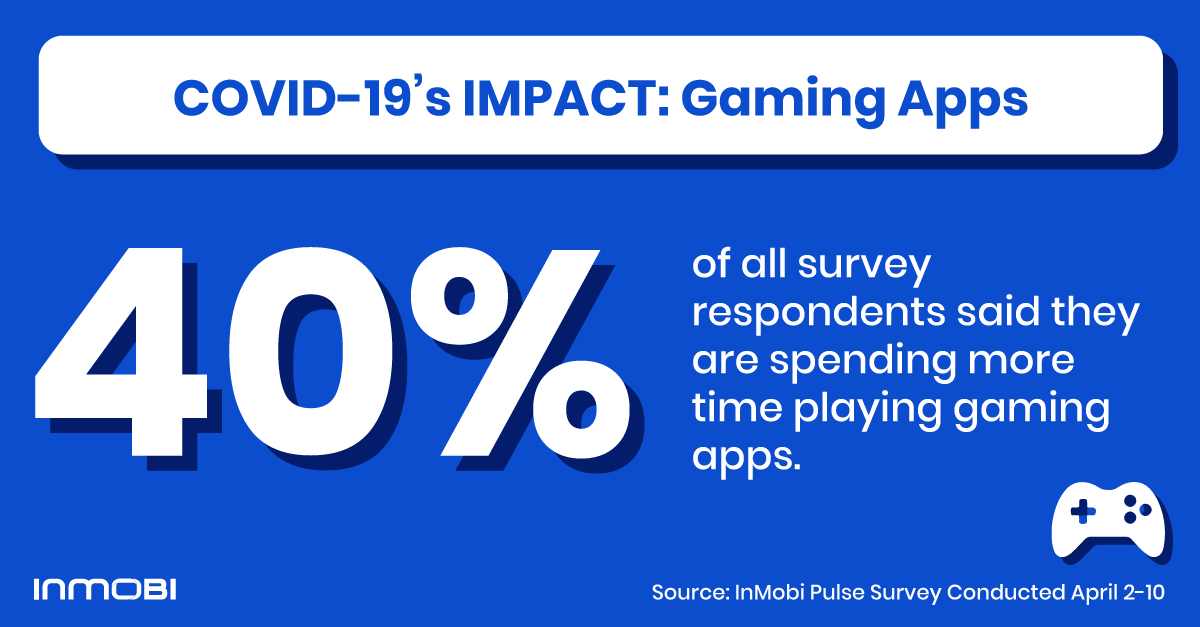 Reviewing the Most Popular Entertainment Apps During Shelter-in-Place

In the video streaming space, the most popular apps were the major paid streaming video on demand players, namely Amazon Prime Video, Disney+ and Netflix. Between March 8 and March 15, week-over-week installs of the Disney+ app were up 46%, while week-over-week installs of the Netflix app were up 55% between March 22 and March 29.

Ad-supported video-on-demand services saw some growth during certain weeks, but their growth overall wasn’t as strong nor as consistent as it was for the three previously mentioned apps. For example, while week-over-week installs of the Tubi app were up 18% between March 8 and March 15, week-over-week installs dropped 10% the following week.

Across the major video apps that run ads, usage (which we measure through recorded ad impression opportunities) spiked around March 18. It has declined somewhat from that high point, but it has more or less stayed roughly consistent since then.

In the mobile gaming space, major publishers like Zynga, Activision and Electronic Arts saw installs of their top apps rise in March. And, usage of apps like Worsdcapes and Words with Friends rose notably in March as well.

How are the people installing and using these various entertainment apps in March different from those utilizing these mobile apps during the first two months of the year? In both the streaming video and mobile gaming spaces, there are some notable differences.

On the video side, app owners in March, compared to the beginning of 2020, are slightly more likely to be female, although the majority of app owners throughout the year are still male. They’re also more likely in March to be between the ages of 26 and 55 and not White.

Both before and during the pandemic, Americans sought out various forms of entertainment. As options narrow, though, what can brands in the entertainment space do to identify and target the right individuals right now?

For one, location data can help. Even though no one is visiting places like amusement parks, movie theaters or stadiums right now, it’s possible to see who was previously going to these locations over the past six or nine months and then seeing what kinds of apps these audiences are using now.

In addition to targeting by basic demographics like age and gender, brands can use mobile-first behavior to develop and leverage unique audience segments. Here are a few examples: