For many Americans, shelter in place orders are now in their third month – and many of us may be stuck at home for many weeks longer. At this point, how are adults feeling about the present situation, and how are their behaviors and situations evolving?

Since March, we have been surveyed Americans once a month (click here to see the March survey results, and here are the April survey results) using InMobi Pulse, InMobi’s mobile market research solution. For the May edition of this survey, we reached out to over 1,500 people across the country from May 7 to May 13, seeing how people of different genders and ages were reacting to the pandemic. 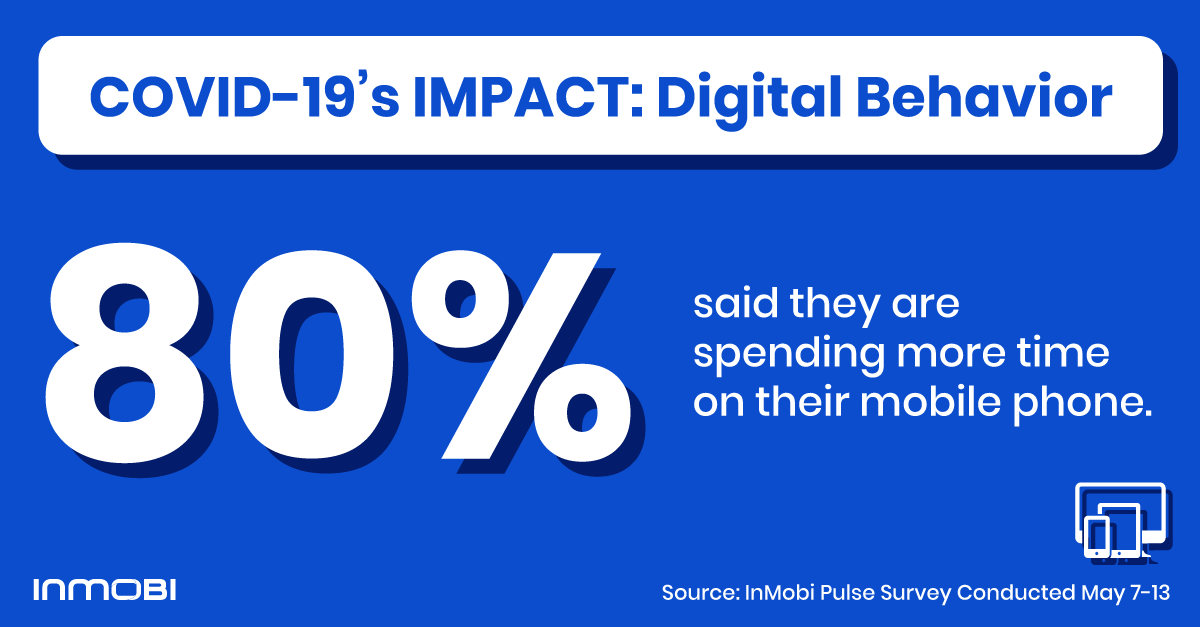 As InMobi is very much an app-first company, we are especially curious to see what role mobile devices are playing for Americans today. And the data shows that adults in the U.S. are turning to smartphones and tablets even more frequently these days.

In May, 80% said they are spending more time on their mobile phone, up from 73% in March. Women are more likely than men to say they are using their mobile phones more frequently now (83% vs. 78%), and usage is higher among people between the ages of 18 and 25 than for any other age group at 94%.

What specific apps are people turning to more frequently now? Gaming apps topped the list, with 43% saying they were playing mobile games more often; this is up from 40% in April.

Besides mobile games, Americans in May reported using social apps (30%), entertainment apps (25%), music apps (21%), news apps (19%) and communication apps (18%) more frequently. This shows that adults in the U.S. continue to prioritize entertainment and staying in touch with the outside world while sheltering in place.

Between April and May, fewer women, people with kids at home and people between the ages of 18 and 25 reported using educational apps more frequently. As the school year winds down for many, it makes sense that usage of these apps would decline as well.

Are Americans staying at home? In May, 65% were avoiding leaving home unless necessary. This is up from March when 61% said this, but far down from the 79% in April who said they were strictly avoiding others.

Perhaps unsurprisingly, many Americans have been negatively impacted by the pandemic. In May, 22% said they were laid off or were furloughed, up from 17% in March and 20% in April. Similarly, the share of those who said they have gone from full-time to part-time employment has gone from 7% in March to 9% in April to 11% in May. In May, 62% of those who said they had been laid off or furloughed were previously making less than $50,000, and three-fourths of this group does not have kids at home.

This has led to a rise in the use of teleconferencing apps, with 58% indicating that they are using online conferencing tools now – up from 48% in March. Zoom continues to be the most popular choice, with 30% of Americans using it more frequently now – up from 24% in April and 13% in March. Other common conferencing solutions used in May include Microsoft Teams (17%), Cisco WebEx (11%) and Skype for Business (11%).

There has been an increase in people ordering groceries online for delivery or curbside pickup. The share of Americans who are doing this has gone from 5% in March to 10% in April to 14% in May. Americans between the ages of 26 and 35 (a.k.a Millennials) were the most likely age range to start buying groceries in this manner.

In May, 31% said they have reduced or stopped eating at restaurants. This makes sense, as restaurants remain closed throughout much of the country. But the share of Americans saying this has gone down from 37% in March to 34% in April to 31% this month.

Interestingly, 17% of Americans in May said they have reduced or stopped ordering takeout or delivery from restaurants. Still, this is down from April, when 20% said this.

This biggest month-over-month shift here occurred with people between the ages of 18 and 24. Among Gen Z survey respondents, the share who said they have reduced or stopped ordering takeout or delivery from restaurants went from 24% in April to 17% in May.

Besides groceries, what else are Americans buying more of in May? Top categories include household care items (21%), entertainment (9%), beauty and personal care items (8%), pet supplies (8%) and Wi-Fi and mobile data plans (8%).

Some of the biggest jumps in spending occurred with Millennials. Here’s how people aged 26 to 35 reported increasing spending between April and May:

Still, many Americans have cut back on spending in other key areas. In fact, 84% report decreased spending to some extent in May, up from 73% in March. As the economic conditions worsen, this figure may rise even further.

How specifically are adults in the U.S. cutting back? What are they spending less on today? In May, travel topped the list (48%), followed by transportation (39%), clothing, shoes and jewelry (37%), entertainment (36%) and beauty and personal care (21%).

With many physical storefronts closed or only offering limited services, many consumers are turning to online channels to buy the things they want and need. This is hardly a new trend, as e-commerce has been growing in popularity for a long time in the U.S., but the sector is becoming further ingrained in American shopping habits of late.

According to our May survey results, 56% said they’re shopping more online. This is a notable increase from 50% in April and 34% in March who said the same thing.

What specifically are Americans now buying online? The top categories in May were clothing, shoes and jewelry (17%), grocery (16%), household care items (14%) and beauty and personal care items (12%).

It is curious to see clothing, shoes and jewelry leading the pack, especially with so many people still stuck indoors. While this increase may be coming from people buying loungewear like athleisure and sweatpants, there may be other factors at play.

It is worthwhile to note that the people least likely to be strictly avoiding contact with others (people aged 18 to 35) are also the people most likely to say they are buying these kinds of items online more frequently. In fact, the share of Gen Z survey respondents (18-25) specifically who said they are buying more clothing, shoes and jewelry online has gone from 8% in March to 18% in April to 27% in May.

What are people doing now to pass the time? A common pastime now is streaming TV, with 35% of people in May saying they’re doing more of this now. This figure is up from 33% in April and 25% in March.

In particular, 45% of those with kids said they were streaming more TV in May, while 55% of Millennials (26 to 35) and 51% of Gen Z (18-25) said the same thing. This shows how connected TV and video-on-demand viewing is dramatically rising in popularity, especially with people stuck at home.

Just over a quarter of people (26%) said they are watching more live TV in May. The same percentage said they are listening more to music and/or the radio.

News consumption has shifted over time. In May, 30% said they were following the news more, but this is down from 33% in April and 38% in March. As the pandemic progresses, people may be less inclined to closely follow the news if they think they’re hearing the same things over and over again. In fact, 16% of survey respondents in May reported using the internet to share news regarding the coronavirus – down from 20% in April and 27% in March.

The Impact of COVID-19 on The Future

Americans think that COVID-19 will impact their buying, shopping and entertainment behaviors for a long time. In May, 40% said their behaviors will be altered for six months or longer, which is up from the 20% who said the same thing in April. Back in March, only 11% of Americans thought their behaviors would be impacted this long.

Indeed, back in March, 61% of adults in the U.S. said their behaviors would be impacted anywhere between two weeks and three months. The share of Americans saying the same thing in May was down to 32%.

Among women, 44% said in May that their behaviors would be impacted for six months or more, 37% of men said the same thing. The most pessimistic Americans are those between the ages of 36 and 45 and those between the ages of 56 and 65; among each of these cohorts, 18% in May said COVID-19 would impact their behaviors for at least a year if not longer.