COVID-19 has proven to be a truly global pandemic, impacting people in just about every corner of the world. The Gulf countries of Saudi Arabia, the United Arab Emirates (UAE), Qatar, Kuwait, Bahrain and Oman have closed schools and universities and implemented strict lockdown measures following pandemic hits in each location.

To what extent has COVID-19 influenced consumer behavior in the region? To find out, we turned to the data. By analyzing mobile in-app ad requests in February and March, we can see how COVID-19 and government responses to it has impacted people and their behaviors throughout this region.

From March 15 onwards, every Gulf nation saw a notable increase in mobile app usage. During the second half of March, the highest mobile usage was recorded in Saudi Arabia, the most populous of the six countries, followed by the UAE and Kuwait.

Why was mobile usage spiking during this period? This is when the number of cases kept on increasing - and when lockdown measures either were first implemented or beginning to really sink in across the region. With more people stuck indoors, naturally many turned to their mobile devices to communicate, stay alert, entertain themselves and more.

What Kinds of Apps Are People Using Most?

People are turning to their smartphones to stay connected and to adapt to the pandemic. As a result, mobile engagement has surged across various categories.While mobile usage is up across the board in these nations, certain app categories are seeing more use than others.

In particular, we observed an 833% increase in mobile engagement among apps in the social and communication category in terms of ad requests during the second half of March.It makes sense that this category saw more growth than any other, with people turning to their mobile devices to replicate connections that otherwise would happen in person.

Saudi Arabia recorded the highest surge in the usage of social and communication apps among all six countries. The nation’s migrant community, which is the biggest among all of these countries, is now connecting more frequently with friends and family back home, which is likely contributing to this massive increase.

Kuwait and Qatar also saw a massive increase, while Oman and Bahrain had upswings at relatively smaller scale. There was growth in the UAE as well, but not as much as might be expected considering the country’s population as a fair amount of social media usage and communication still happens through laptops and desktops as opposed to mobile. 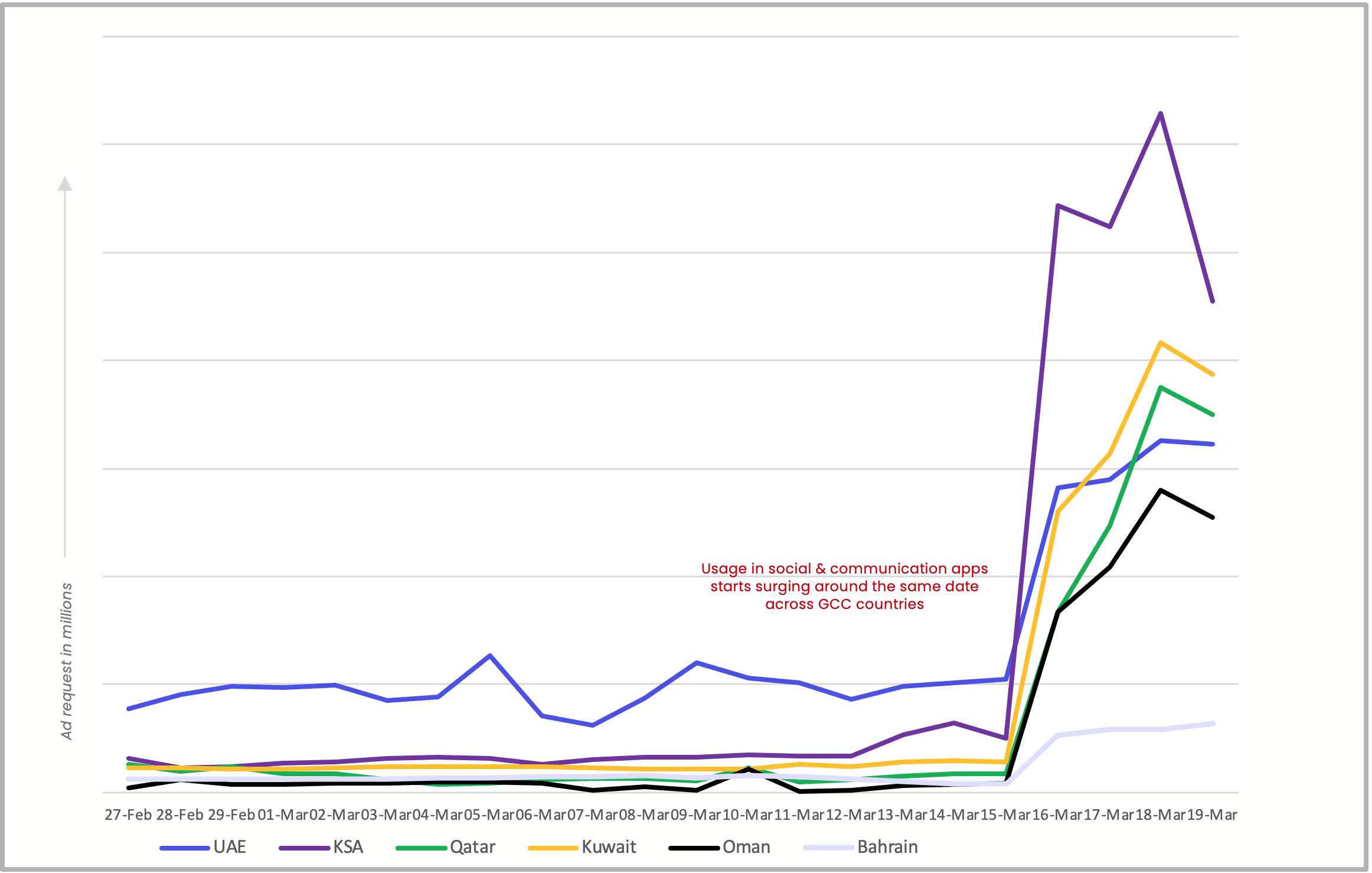 After social and communication apps, the second biggest spike occurred with news apps. In March, usage of news apps rose by 20%, with people in Gulf countries more frequently keeping tabs on the ever-evolving situation.

In UAE, the biggest spike happened when there were 50 confirmed COVID-19 cases in the country. This can be attributed to people checking news more often as the pandemic spread. In Qatar, news usage surged as the nation’s lockdown of schools and educational institutions was first announced.

Gaming is another area that has seen a spike, with usage of apps like Wordscapes up 18% in the region. Both total gaming app usage and usage growth were highest in Saudi Arabia and the UAE, the two most populous Gulf countries. In these two nations, word games, puzzle apps and arcade games lead in the gaming category.

Oman and Kuwait also saw a material upswing in gaming usage around the same time. Puzzle games are especially popular in Oman, while arcade and action games lead the way in Kuwait. Bahrain saw a spike around March 12 and continues to stay at the same level of engagement post that date, while Qatar hasn’t seen much of a change in usage.

Many other app categories were up in the region in March as well. Usage of hobby and lifestyle apps was up 14%, while use of technology and education apps was up 9%. Usage of entertainment apps like streaming video services was up 11%.

How will these trends shift over time? It’s hard to say, although people in the region will likely continue to turn to apps during the pandemic – and beyond.

Interested in learning more about the data and how it can be applied to help you? Reach out today to get in touch with one of our mobile experts. 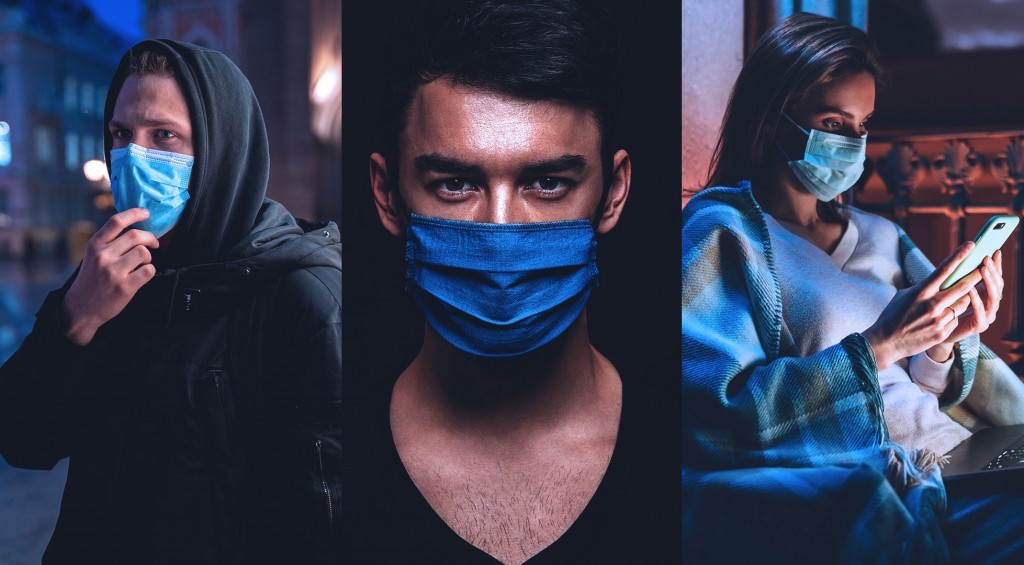 The Impact of the COVID-19 on Consumer Behavior in Australia
April 16, 2020
By Richard O'sullivan
5 min read 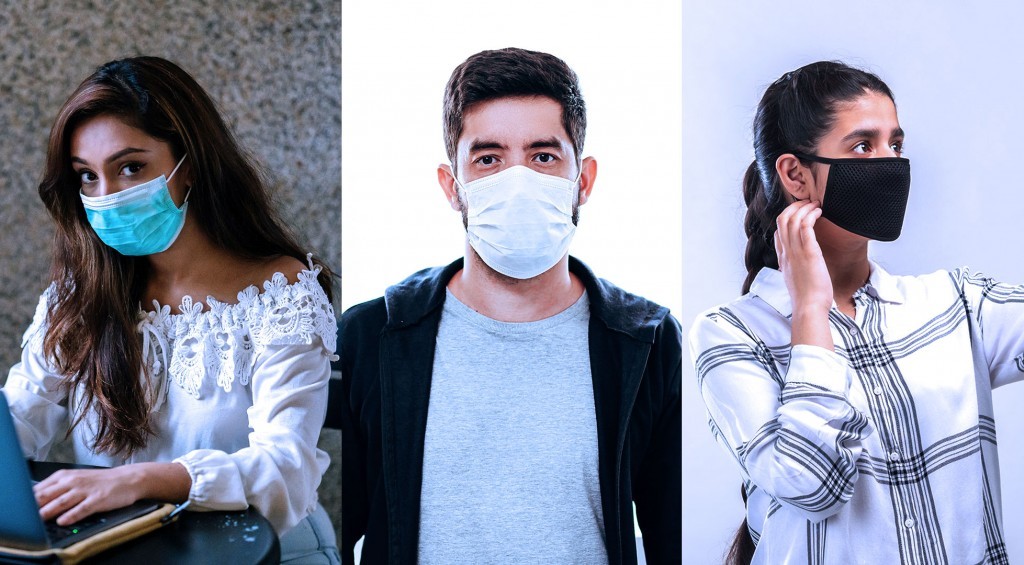 Impact of COVID-19 on the Consumer Behavior in India
April 09, 2020
By Vasuta Agarwal
5 min read