With over 3 billion smartphone users in the world and over 200 billion app downloads, the in-app audience is anything but small. Time spent on mobile devices in most major markets is significantly higher than any other platform including traditional TV, desktops, laptops and other connected devices.

In North America, the average user spends around four hours a day on their smartphone, and over 90% of that time is spent in-app. Mobile in-app is also the single largest platform to reach Millennials and Gen Z – who are considered “unreachable” by traditional TV. 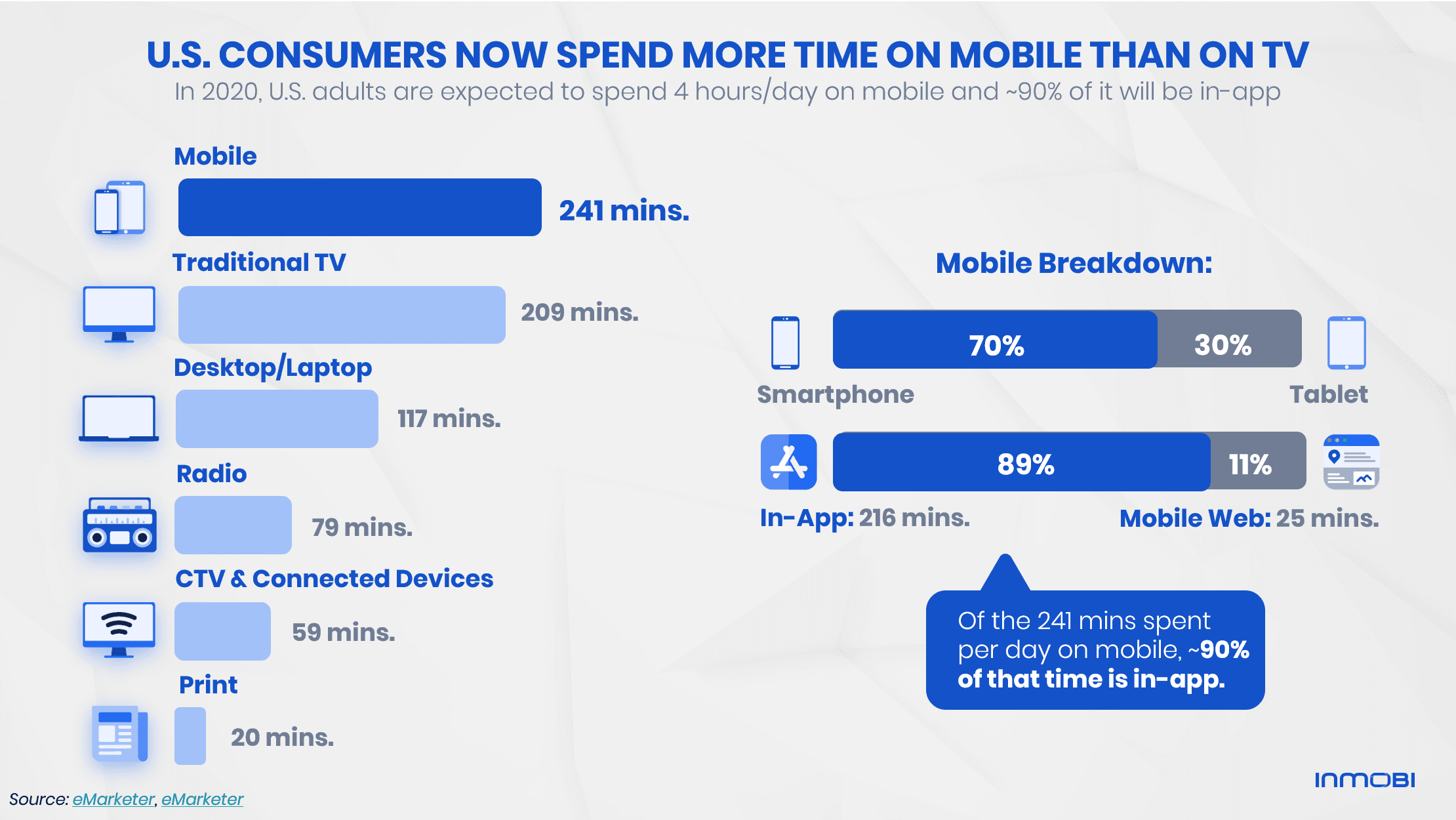 Time spent on mobile is quickly growing, and marketers are realizing the importance of engaging with audiences where they spend most of their time. This is why in-app ad revenues have been rising steadily over the past few years.

Myth #2: Users Spend Most of Their Time Engaging Only with the Largest Social Media Apps

Over the last few years, mobile users have been spending more time outside of the “Walled Garden” social and communication apps. In fact, the average user spends around 50% of their time on mobile engaging with apps across gaming, entertainment, news. weather, utilities and more.

Gaming is one of the biggest app verticals in terms of users and ad volume, and almost a third of the world’s population will play a mobile game this year. But who are these mobile gamers?

Contrary to popular belief, mobile games have a very diverse user base – with users across all age brackets, and a roughly even gender split. While mid-core and strategy games attract a predominantly male audience, the gender split for casual gaming is nearly even. And when looking specifically at hyper-casual games, females outnumber males.

In the minds of many advertisers, in-app advertising is still a proverbial Wild West, filled with shady players waiting to steal your money.

In truth, however, this perception is far from reality. Over the past few years, the in-app advertising ecosystem has instituted a number of strict guardrails in place to keep fraud low and to ensure that brand ads only appear in the right context and setting.

For example, with programmatic advertising becoming the preferred choice for both the demand and supply sides, Interactive Advertising Bureau (IAB) has introduced measures like app-ads.txt, which solves app misrepresentation by preventing inventory from being sold by unauthorized sellers. These standards have been adopted globally across major app publishers, empowering advertisers to transparently buy programmatic app inventory more confidently.

Pre-bid filters and third-party fraud measurement systems ensure advertisers are protected against fraud. Further, in-app experiences provide predicable, curated content to users which makes them more brand-safe than content that is dynamic in nature – like news and social sites.

While independent third-party measurement providers like Moat, IAS and DoubleVerify provide viewability measurement, the launch of IAB’s Open Measurement SDK (OM SDK) has eliminated the need to implement separate SDKs for accurate viewability verification. The OM SDK is an industry-wide standard that offers a common code for facilitating third-party in-app viewability measurement with one SDK. This goes a long way towards reducing discrepancies across partners. In addition, all performance metrics can be tracked and optimized for in-app environments.

Myth #6: Reaching Desired Target Audiences Through In-App Mobile Ads is Impossible Because There are No Cookies for Targeting

In-app advertising offers the most accurate and precise audience targeting using mobile device IDs as the identifier. The supply-side platform’s SDK ties the user signals anonymously to privacy-compliant, unique device IDs. Unlike cookies, device IDs cannot be deleted by the user. Hence, device IDs are the source of data for personalized targeting and are far more deterministic than traditional cookie-based identification methods.

In addition, buyers who have traditionally been focused on cookie-based channels (desktop and mobile web) can leverage third-party cross-device targeting solutions to map cookies with device IDs. This enables buyers to retarget their desktop and mobile web users in a mobile app environment. Amplify brand awareness by targeting users across devices.

Myth #7: Ad Formats are Not Effective on Smaller Screens

In digital advertising, banner ads have long been the most common and inexpensive ad format available. As such, the prevailing notion has been that ads are not really seen and that ad clicks are largely coincidental.

This, however, is not the whole story. Advertisers have a wide variety of ad formats to choose from when running in-app ads, including native ads, interstitial ads and video ads, among other options.

There are other key benefits to in-app ad formats too. For one, they can be easily customized based on a user’s device, location and interests, which can greatly help improve results. In-app ads can also include interactive features like rich media end cards, which can really help boost click-through rates.

Myth #8: In-App Advertising is Only Ideal for App Installs

Thanks to the scale and reach of mobile, in-app advertising are great for brand awareness campaigns. And the unprecedented level of measurability and viewability inherent in in-app advertising, it’s also ideal for mid-funnel prospecting, customer acquisition and customer retention campaigns, among other key use cases.

Interested in getting started with in-app advertising? Reach out to us today to learn more. 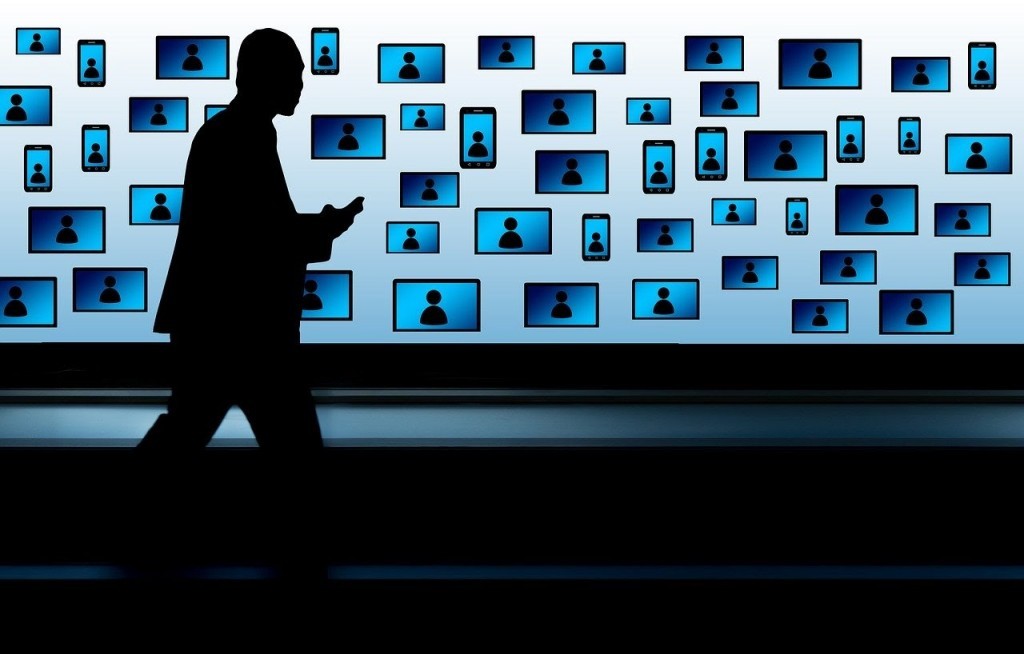 Don’t be scared by programmatic: How to fight your in-app advertising fears [Infographic]
October 16, 2019
By Matt Kaplan
1 min read