Are Americans Ready to Shop In Person Again?

In the United States, many consumers are ready to again leave their homes and get back into their old routines. But does this gradual reopening also include retail?

To find out whether consumers are ready to shop in person again, we reached out to a representative body of over 1,800 Americans in total across the country in May using InMobi Pulse, InMobi’s mobile market research solution.

How Different Americans Are Shopping Today

While in-person shopping is the shopping method utilized by Americans across the board today, older Americans and those living in the suburbs are more likely to prefer this purchasing method. Four in five adults over the age of 55 said they are currently shopping in person, as compared to 71% of those between 18 and 34 years old. And while 83% of suburban shoppers are going in person, just 63% of urban shoppers said the same thing. 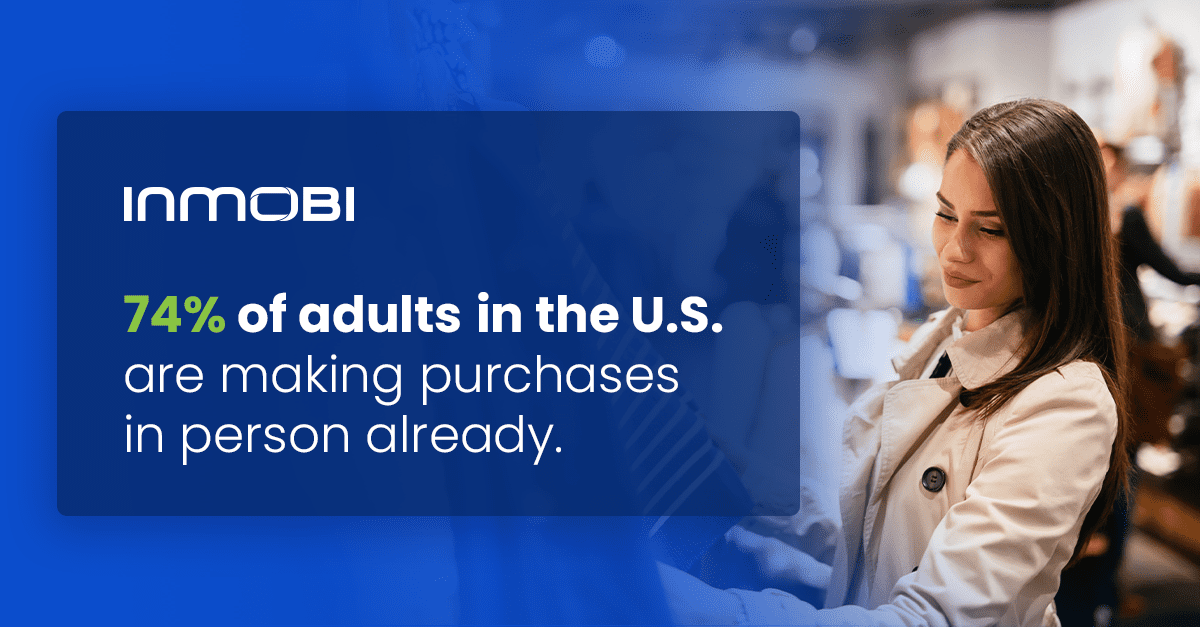 We observed a similar breakdown when asking Americans how they are obtaining their retail purchases, with 70% shopping in person now. In comparison, 51% said they are getting items delivered and 30% are using BOPIS (buy online, pick up in store). Older Americans are more likely than younger ones to be getting their retail purchases in person (76% vs. 66%) and suburbanites are more likely than city dwellers to be obtaining purchased items in person (76% vs. 61%).

Why are Americans preferring to shop in person again? Top reasons include immediate availability (59%), ability to experience the product (52%), avoid having to make a return or exchange (44%) and convenience (38%).

Where Are Consumers Shopping?

Close to half (49%) of Americans said they have made a purchase from a convenience store or pharmacy in the last three months, while an additional 47% said they had shopped at a big box or department store in the same time frame. 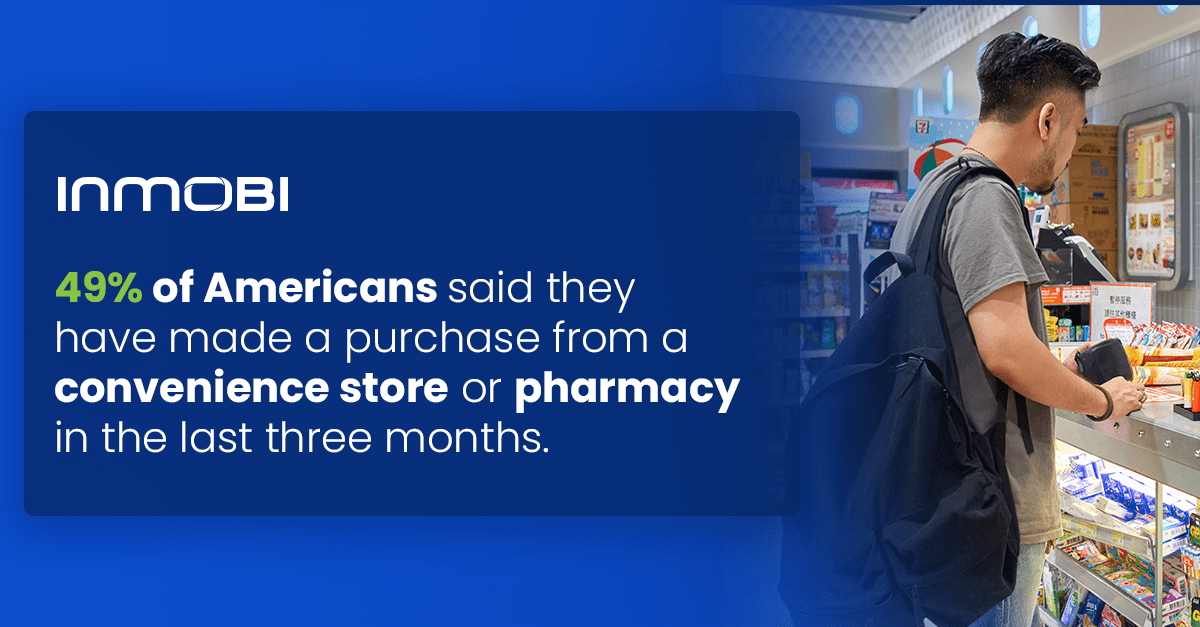 A Look at Current E-Commerce Trends

On the flip side, younger people and people living in cities are more likely to prefer e-commerce. Among those between 18 and 34, 59% said they are using third-party e-commerce platforms, while 41% of older Americans said the same thing.

Across the board, 42% of adults in the U.S. said they had made a purchase through an online marketplace like Amazon or Etsy in the past three months. Yet again, younger people were more likely than older Americans to have used these kinds of portals this year (49% of those between 18 and 34 vs. 39% of those over 55). 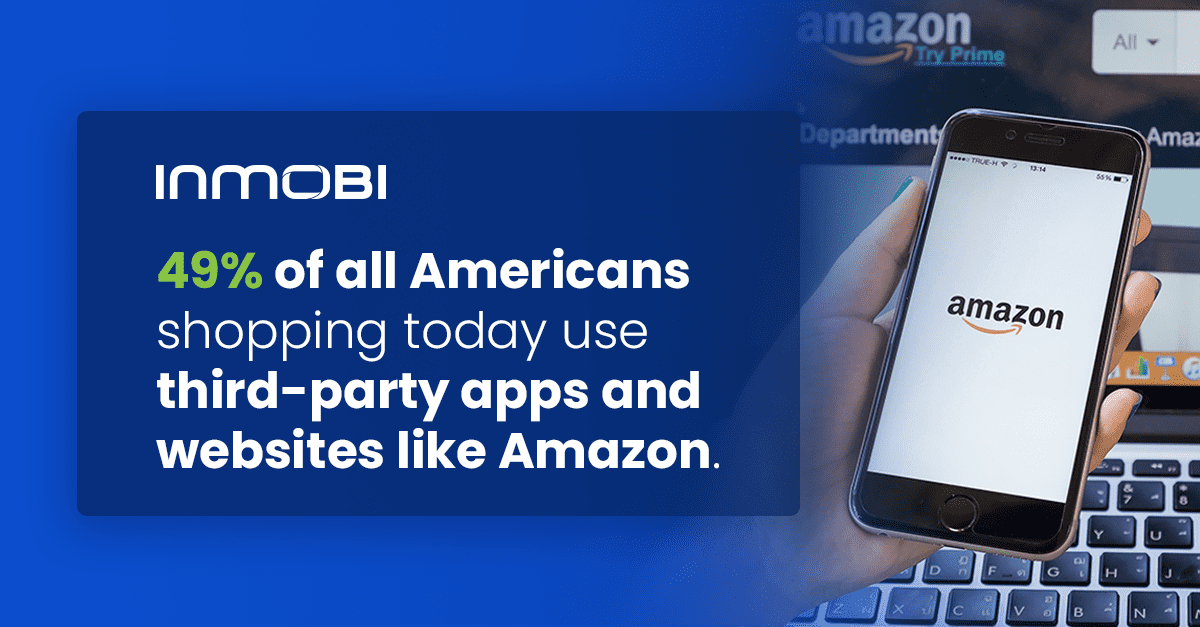 Among those who shop this way, 56% said they prefer to purchase retail items via third-party app/website so they don’t have to go to stores. Other commonly cited reasons include better prices (54%), to save time (50%), free shipping (49%), ability to shop 24/7 (48%) and to find products that aren’t sold nearby (48%).

For young people and city dwellers, price is the top reason to use e-commerce channels. Among Americans who use third-party apps and websites like Amazon to shop, 74% of those between 18 and 34 years old and 81% of those living in cities said they shop this way to get better prices on their retail purchases.

How Shopping Behaviors Will Change Over Time

As our research shows, many Americans are already shopping in person. But will these behaviors last?

What about online shopping? Will consumers continue to utilize e-commerce channels in the future?

Who are more likely to increase their online shopping in the next six months? Unsurprisingly, it’s people between the ages of 18 and 34 (30%) and urbanites (37%).

A significant portion of this online shopping will happen through apps. Overall, 38% said they were likely or highly likely to shop using a retail app in the future.

And who are most likely to be turning to retail apps in the future? Our research found that 45% of those between 18 and 34 years old said they will be turning to these apps going forward, in addition to 55% of those who currently shop with consumer direct brands like Casper.

What Retailers Need to Know About American Shopping Habits

As our research shows, Americans are already heading back into physical stores, although many in the U.S. – especially younger people and urbanites – are committed to e-commerce. In this ever-changing shopping environment, how should retailers move forward?

Interested in learning more? Reach out today to get started.