Social media platforms have been all over the news in 2020 as a result of international and presidential politics. And not only have the social platforms themselves been making headlines, but many Americans have been turning to these apps to stay in touch with others and learn more about the world while they are largely stuck at home.

To get a better sense of who have been downloading social media apps in 2020, we turned to the data. Specifically, we wanted to look at install and user trends for the following social media apps: Facebook, Instagram, LinkedIn, Pinterest, Reddit, Snapchat, TikTok and Twitter.

Using InMobi’s mobile-first data sources, we can understand app install trends in the category and see who have been turning to their services of late. Here’s what we uncovered.

Most social apps have struggled to maintain positive app install growth over the past few months. In particular, between July and September 2020, Pinterest is the only app to see any notable growth.

This aligns with what eMarketer has found as well. Between 2019 and 2020, they are predicting just over 3% growth in social media platform users in the U.S. Overall, the numbers show that platform users have largely plateaued of late.

However, eMarketer’s analysis shows that people who already are subscribed to social media are often using it more heavily. The problem is that these apps are not attracting new users in any significant way.

In this period, TikTok led the way in terms of week-over-week net app installs. But their numbers did take a dive at various points in this three-month period too, specifically in mid-September when the Trump Administration was forcing the app to sell off its U.S. business.

Yet, TikTok’s competitors largely did not capitalize on the app ownership controversy. Between July and September 2020, only Byte and Triller saw any increase in net app installs, but even then their overall numbers fell below what TikTok was seeing at the same time.

ACTION: Social media app marketers should ramp up in-app advertising to reach consumers where they are and grow app adoption. As this space appears to coalesce, marketers and advertisers have their work cut out for them to grow their user base.

As mentioned before, current social media app users are turning to their favorite platforms with more regularity throughout 2020. But what do these app owners look like?

Across the board, well over half of all social media app owners are White. Reddit is the least diverse, with 68% of all of their mobile app owners being white. TikTok have the most diverse audience, as 23% of their app owners are Latinx and 15% are Black.

For most of these apps, the majority of app owners are over the age of 35. This again aligns with eMarketer’s analysis.

The only apps with a notable following among younger Americans are Reddit and Snapchat. Overall, 40% of Reddit app owners and 37% of Snapchat app owners are between the ages of 18 and 35. Even for TikTok, which has a reputation of being popular with younger people, only 30% of their app users fall into this age range (note: InMobi app user data only covers adults 18 or older).

Twitter app owners are heavy social users with large percentages of app crossover, while Facebook app owners have the smallest crossover with other apps. Snapchat app owners are strong users of Instagram, but fewer Instagram users have adopted Snapchat. 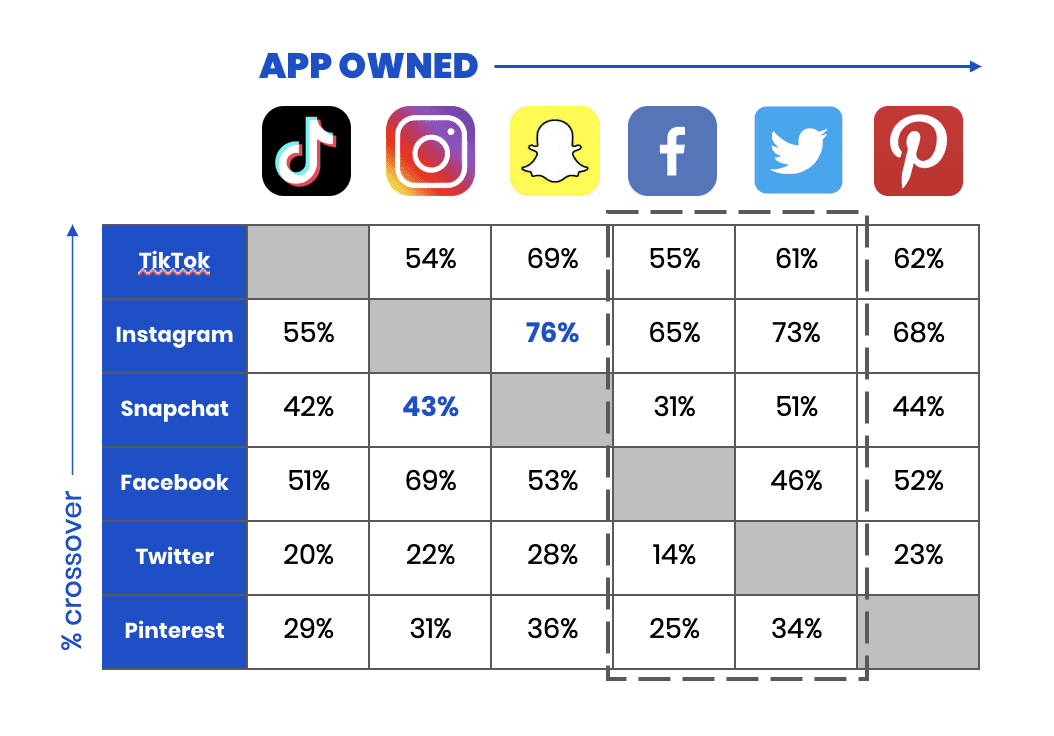 ACTION: Marketers working to boost app ownership should be sure to target the right audiences. By using demographics such as age and income, only those that are likely to actually download and use a social media app will be exposed to relevant advertising.

Further, based on the trends exhibited in this insights report, we recommend activating on any of the following audiences to reach your most relevant users:

Did any of these data points surprise you? Let us know on InMobi’s social media handles! Send us your comments on Twitter, LinkedIn and/or Facebook.

Matthew Kaplan has over a decade of digital marketing experience, working to support the content goals of the world’s biggest B2B and B2C brands. He is a passionate app user and evangelist, working to support diverse marketing campaigns across devices. His favorite social media app is BaconReader for Reddit. Americans are Turning to Apps for Entertainment During COVID-19
May 18, 2020
By Team InMobi
6 min read